We use cookies to improve your experience and to help us improve our site. Continuing to use this service means you agree with our Cookies policy.

A WARSAW MELODY By Leonid Zorin

Set during the heyday of the Soviet bloc, the story of A WARSAW MELODY follows the blossoming relationship between a Russian boy and a Polish girl and their struggle against the public and social institutions that explicitly forbid the existence of their love. A WARSAW MELODY is a very human story that goes to the heart, not to the head.

This is the first UK production of a classic of Russian drama. Leonid Zorin's A WARSAW MELODY is part of Russian drama and literary education (in the way that Waiting for Godot and Educating Rita are to English literary education, for example). A WARSAW MELODY was written in 1967 and was performed some 4000 times in its first year alone. It is one of the most frequently staged plays in Russia and, previously, the Soviet Union. It has been performed in over 150 Russian cities and 15 countries beyond Russia.

A WARSAW MELODY is directed by London-based Russian director and actor, Oleg Mirochnikov, who has also taught and directed at leading London drama schools for over a decade, in particular Drama Centre where actors he trained include Michael Fassbender. His credits include recent work as Russian dialogue coach to Kevin Bacon and other cast members of X-Men: First Class, and as an actor he has recently finished filming World War Z with Brad Pitt. He also appeared in the acclaimed production of Before I Sleep by Dreamthinkspeak (Brighton Festival).

A special ticket offer for A Warsaw Melody this Monday through to Thursday! Quote 'Melody12' when booking online or over the phone at www.arcolatheatre.com

**** The Times - ”It breaks your heart - a memorable portrait of joy, pain and regret”
**** Passion for Theatre - "One of the most enticing stage performances in London"

“Charming - an outpouring of frustrations, hopes and romantic memories that is quite stunning” - British Theatre Guide

"Oliver King is excellent as Victor, and Emily Tucker is skittishly alluring... their ruin is captivating" - The Spectator

"Emily Tucker and Oliver King give strong performances. Tucker’s airy, flitty charm is a nice balance to King’s heavier demeanour and furrowed brow which at times betrays an irresistible vulnerability." - The Telegraph

"Drenched in Chopinesque romanticism." - The Guardian 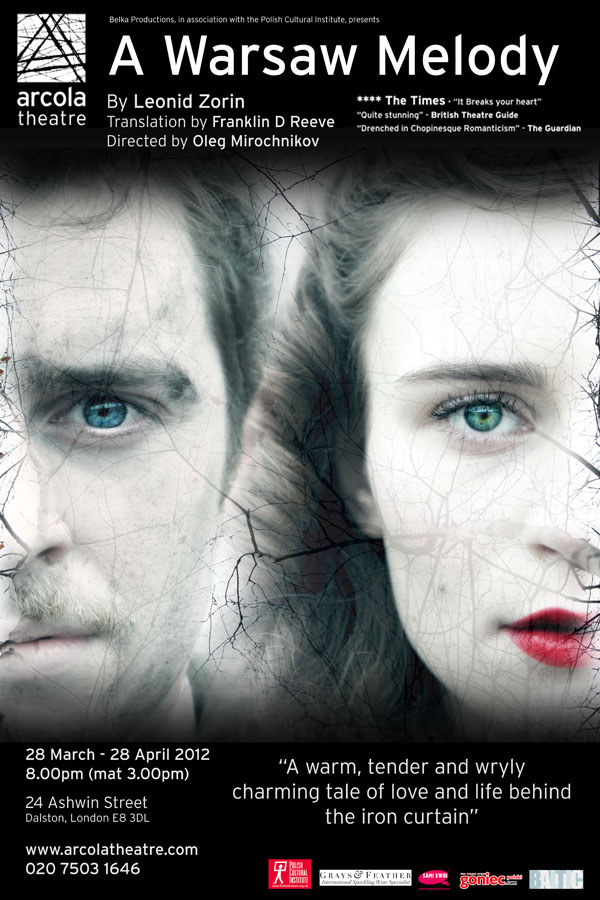